The Dermapen™ is a revolutionary micro-needling device which aims to tighten, lift and rejuvenate skin. The Dermapen™ can visibly improve the appearance of : 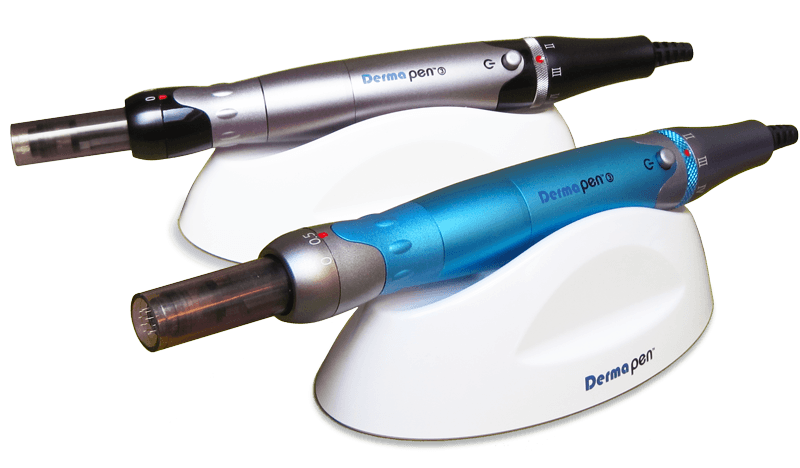 The Dermapen™ consists of two parts: an electric hand piece that plugs into the wall for a stable and consistent source of power, and a disposable needle tip, containing 12 microscopic needles. Once the needle tip is clicked into the hand piece, your Dermapen™ is ready for action. The internal motor of the Dermapen™, powered with revolutionary AOVN™ technology, causes the needles in the Dermapen Tip to oscillate at a rate of close to 110 revolutions per second. When the needle tip makes contact with the skin, the needles create tiny puncture in the skin’s surface, causing micro-trauma, and inducing an immune response, and subsequently, the creation of new healthy collagen. The punctures also act as micro-channels that carry topical nutrients used during the treatment deep into skin layers for an increased effect. Because the needles oscillate as quickly as they do, the tip of the Dermapen™ easily *glides* across the skin, without catching or causing any dermal tearing.

This small, easy to operate device is able to produce similar, if not better, results to a fractional laser, without the risk of hyper or hypo-pigmentation, as well as other side effects and downtime associated with these effective, but potentially damaging ablative heat based treatments.

The Dermapen™ was the original micro needling system made available to the world market. Over the last few years, this has made the Dermapen™ the most widely used system by practitioners, as well as the most searched for automated needling treatment by the public. Moreover, being the original has given us the advantage of having continuous feedback from practitioners throughout the world. We have been able to assess what it is our clients loved about the device, but also what they thought the Dermapen™ lacked. We have been able to take that feedback and apply it to our product. The result is the Dermapen 3™.

The Dermapen 3™ takes all the advantages of our older devices, leaving behind any shortcomings, and incorporates it all into an automated device that is able to produce over 1,300 micro holes in the skin per second, making the Dermapen 3™ more effective than dermal rollers, dermal stamps, and various other automated needling devices.

The Dermapen 3™ features 12 needle points in each of its tips and a stronger, smoother, more robust motor capable of delivering nearly 110 revolutions per second (108 revs per second, to be exact) at it highest setting. The depth of penetration is fully adjustable between 0 to 2.5 mm to accommodate any region of the body and face. The superior AOVN™ technology of the Dermapen 3™ allows for smooth, drag-less operation and optimal results.

If you have any questions and queries about any of our services, or anything in relation to a procedure-
feel free contact us at any point.

Get in touch with us